There are many ways you can join the movement to #AbolishFrontex…

From organising vigils for those killed by the EU’s border regime; to targetting arms companies profiting from the militarisation of borders; to reclaming public space with posters, banners and artistic interventions; to disrupting decision-making and lobbying events with occupations, noise demos and creative protests – there are hundreds of ways to take action against Frontex and the system it represents.

Here are some examples of past actions groups have taken:

Join or start a local group

People have been taking action against the EU’s border regime and the forces that keep the system in place for years. Find out about groups who are taking action near you for example in the movement to legalise people who move and the struggle against detention centres, deportations, the militarisation of borders and other structures of colonial capitalism.

Which actors are involved in upholding Frontex and the system it represents?

Find out more about how these different actors are involved in Frontex and keeping the EU border regime in place here or by downloading the pdf.

For research, articles and reports see each page under “What we’re calling for“. 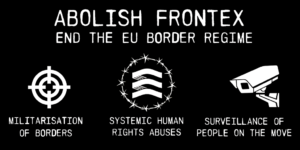