On International Migrants Day, 18 December 2021, the call to Abolish Frontex and end the devastating EU border regime resounded in over 40 actions in 13 countries in Europe and Africa. With a variety of actions, from information sharing to demonstrations to blockades, groups and organisations, working together in the international Abolish Frontex network, showed their resistance against the deadly EU border and migration policies.

At several locations a voice message from the Refugees in Libya, struggling in Tripoli for their lives and a safer future, was played. Actions also called attention to other urgent situations: the horrific play with migrant lives at the Polish-Belarussian border, the drownings of people on the move in the Mediterranean and other deaths caused by Fortress Europe’s racist and violent policies, pushbacks, the role of the arms industry and the expansion of Frontex.

Below you’ll find an overview of the actions, that show that the movement against Frontex is growing and more and more people demand freedom of movement for all and an end to EU border policies. Any additions or corrections? Let us know via info[at]abolishfrontex.org END_OF_DOCUMENT_TOKEN_TO_BE_REPLACED 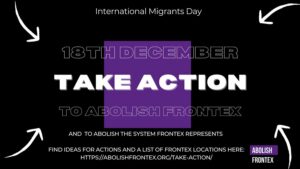 On Saturday 18 December, International Migrants Day, across Europe and beyond there will be actions to #AbolishFrontex and the EU border regime.

Join one of the actions on the list of below or organise your own!

END_OF_DOCUMENT_TOKEN_TO_BE_REPLACED

[by Lena Karamanidou, researcher] 13 December 2021 – Since 2011, Frontex has established several accountability mechanisms to address the widespread concerns about the Agency’s human rights record. The collective function of the six accountability mechanisms – the Serious Incident Reporting system, Forced Return Monitors, the Fundamental Rights Officer (FRO) and the Consultative Forum, all established in 2011, the Individual Complaints mechanism introduced in 2016, and Fundamental Rights Monitors (FRMs) in 2019 – is to monitor and report fundamental rights violations in the context of Frontex’s operations and strengthen compliance with fundamental rights obligations. In addition to these internal administrative mechanisms Frontex is accountable to other institutions, such as the European Parliament, the Council and courts.

The effectiveness of the Frontex human rights record and accountability regime has always been questioned, but in the course of the investigations into Frontex that have taken place in the last year, it has become clearer than ever that the accountability regime acts as a fig leaf. Rather than documenting violations and violence at the borders of the European Union, it conceals them. Rather than preventing violence – assuming this is possible since the institution of the border is inherently violent and racist – they have been used to exonerate Frontex from any wrongdoing and to legitimatize the violence and violations perpetrated by the EU and its member states. END_OF_DOCUMENT_TOKEN_TO_BE_REPLACED

[by Stop the War on Migrants & Stop Wapenhandel] 7 December 2021 – On 13 November 2019, the European Parliament voted in favor of a major expansion of Frontex, the EU’s border guard agency. This expansion is part of a process started during the ‘refugee crisis’ of 2015 and is, as Frontex itself likes to proclaim, unprecedented in the history of the EU. It’s unprecedented because previously Frontex had a largely coordinating and intermediary function within the European border security system. Frontex essentially ‘borrowed’ its personnel and equipment from the EU member states, a kind of secondment of national border guards. However, this was seen as inefficient and inadequate by both the European Commission and Frontex itself, mainly because EU Member States didn’t commit as much as expected and then subsequently also failed to deliver. This led to the birth of the new mandate. Frontex had to become more independent and “Regulation (EU) 2019/1986” would achieve that. END_OF_DOCUMENT_TOKEN_TO_BE_REPLACED

22 November 2021 – Frontex, the European Border and Coast Guard Agency, has increasingly close relations with the European military and security industry. Since it started operating in 2005 it has primarily functioned as an intermediary between industry and border authorities of EU member states. With its expanded budget for the next seven years (2021-2027) it is bound to become a big
buyer of its own.

Read the fact sheet ‘Frontex and the military and security industry‘ [pdf] by the Abolish Frontex Research Group.

Over 44.764 people have died trying to reach Fortress Europe. In Tripoli, nearly 3000 refugees are protesting outside the UNHCR headquarters following the mass detention of 5000 people and the death of six people in early October. Thousands of people are currently stuck and facing violence at the Polish-Belarus border and are being pushed back into Belarus. Journalists and human rights workers are being kept out of the border are which has become a militarised zone under a state of emergency.

The response from EU member states and its institutions?

END_OF_DOCUMENT_TOKEN_TO_BE_REPLACED

16 November 2021 – Following up the issue on the contract signed between Frontex, the European Border and Coast Guard agency, and the Italian consortium composed by Associazione Ithaca, DIST (Dipartimento Interateneo di Scienze, Progetto e Politiche del Territorio) of Turin Polytechnic and Ithaca Srl (a company controlled by the homonymous association), we took a stand. This morning we have sent an email to the Rector, Vice-Rector, members of the Academic Senate and the Directors and Vice-Directors of the mentioned Department, but also to Altreconomia, the Italian magazine where the story was brought up in the first place. See our letter below. As an organisation/group you can co-sign here.
— Click here for pdfs of the letter in Arab – French – German – Italian – Spanish —

END_OF_DOCUMENT_TOKEN_TO_BE_REPLACED

Re-posted from the Alarm Phone – Watch the med blog

Since August 2021, Alarm Phone has received numerous distress calls from the border between Belarus, Poland and Lithuania. In the media and public discourse, people on the move are portrayed either as a military threat or as absolute victims.

However, when we are in contact with these people, we witness something different:

We see human beings who have decided to move for a variety of reasons. We see people trying to reach their loved ones, and groups of friends trying to reach a safer place together. We also see the distress and concern of their relatives and friends who already made it to Germany or other EU countries on the other side of the border. These relatives and friends try to help those on the move but this can be dangerous as such support is increasingly criminalized. We also see acts of solidarity by activists from Poland, Lithuania, and other countries who stand alongside those in distress. END_OF_DOCUMENT_TOKEN_TO_BE_REPLACED

12 November 2021 – At the end of October Frontex awarded contracts for the provision of firearms and ammunition for its new Standing Border Guard Corps. Austrian arms producer Glock will receive €3.76 million to supply 2,500 9×19 mm semi-automatic pistols (including accessories and training) over the course of four years. Over 3.6 million rounds of ammunition will be provided by Polish companies Mildat and Parasnake Arkadiusz Szewczyk, which will earn €1.24 million in total.
With these contracts Frontex takes another step in building up its own border police force, the first armed EU police force in the history of the Union. While the process of recruiting and training 10,000 officers for the corps by 2027 is ongoing, the first batches of officers have already been deployed to support border security and control operations in Italy, Greece, Spain, the Western Balkans, Lithuania and Latvia. The build–up of the border police force is part of the overall expansion of Frontex into an uncontrollable monster. As such it plays a leading part in the militarisation of Europe’s borders. The agency routinely participates in pushbacks, violence and other human rights violations at the EU’s external borders.

END_OF_DOCUMENT_TOKEN_TO_BE_REPLACED 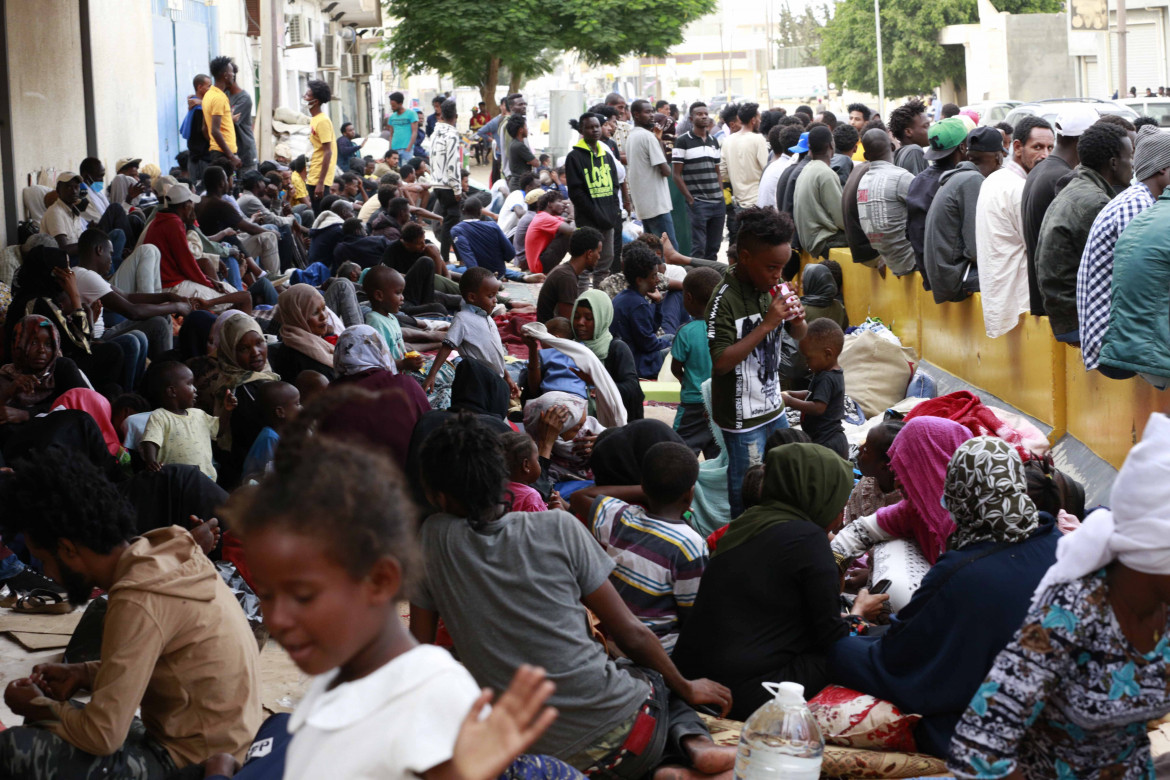 [by Transnational Migrants Coordination] 5 November 2021 – We, migrant men and women of the Transnational Migrants’ Coordination (TMC) express our support for the struggle of refugees in Libya. During the past month, almost 3.000 refugees in Tripoli – tired of torture, rape, arbitrary detention, exploitation, threats, and violence – have been self-organising and have set up a permanent assembly called ‘Refugees in Libya‘ in front of the UNHCR headquarters, with a coordination group to take decisions and make their voices heard with institutions and the media. At least 300 of them are women, and some of them are pregnant. They are the migrants who escaped what the Libyan Ministry of Interior called “operation security”, an indiscriminate round-up which had taken place on October 2nd in Gargadesh, one of the poorest neighbourhoods of Tripoli, and which had led to the detention of more than 5.000 people, accused of violating immigration law, drug trafficking and prostitution, in the Ghout al-Shaal centre. During the raid, six people were killed and others disappeared.