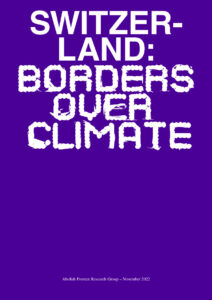 6 November 2022 – While being one of the richest countries in the world, Switzerland’s contribution to climate financing – a major topic at the ongoing COP27 in Egypt – is only modest, not to say shamefully small. In light of how Switzerland profits from extractivist practices that are a major cause for climate change and climate affected displacement, taking into account that the country hosts some of the major financers of these practices, Switzerland’s role is clear: with a border militarisation budget at least 33% higher than its current climate finance spending, it pays more to shut borders, build walls and support a deadly migration regime than to support the countries and communities most affected by climate change with counteracting measures.

Read the factsheet by the Abolish Frontex Research Group