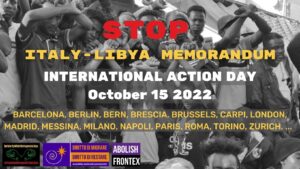 Barcelona, Berlin, Bern, Brussels, London, Madrid, Milan, Naples, Rome, Zurich and many other cities will take to the streets and demand that the Italian government puts an end to this illegal and shameful Memorandum. Outside of Italy, the protests will be held in front of Italian Embassies and Consulates. You can find a list of all the actions below.

The Memorandum violates international laws and human rights. In 2012, Italy was condemned by the European Court of Human Rights for practicing push-backs of people on the move to Libya. To by-pass this sentence, the Memorandum of Understanding (MoU) was signed in 2017. It has since been widely contested and denounced by Amnesty International, other human rights NGOs, UNHCR, the United Nations (UN) and the European Union itself. Refugees in Libya, a group of self-organized people on the move stuck in Libya, have been protesting against the inhumane conditions established by the MoU in front of the UNHCR office in Tripoli, Libya since October 2021, despite the brutal repression they are facing. To date, more than 300 of the comrades arrested in the violent eviction of the protest camp in January 2022 are still detained.

The MoU regulates the cooperation between Italy and Libya on security and irregular migration, which includes: technical and technological support to the so-called Libyan coast guard, the completion of Libya’s southern land border control system; financing of the local detention centers. ​It is mainly funded by the EU and implemented by the European border agency Frontex. Part of the funding goes to the United Nations Refugee Agency (UNHCR) and the International Organization for Migration (IOM), who are providing a humanitarian facade instead of fulfilling their duty to protect refugees in Libya.

But what’s the reality?
– The Memorandum establishes radical externalization, installing a death-regime at the borders and in the Libyan concentration camps. The numerous reports highlighting the atrocities committed in Libya, financed by these Italian agreements, are widely known. Since 2017, 50.000 people on the move have been returned to these camps, as they were intercepted and captured by the so-called Libyan Coast Guard. Libya is not a ‘place of safety’ for disembarkation, still thousands of people are brought ashore there, only to go through the hellish cycle of arbitrary detention, smuggling, attempted escape to safety, interception by the so-called Libyan Coast Guard, and re-arrest. This cycle includes torture, rape, enslavement, hunger and death.

– The Italian government is training Libyan security forces, directly colluded with militias and human traffickers, with whom they do business more lucrative than drug trafficking. This collusion has repeatedly been denounced by the UN Working Group on Enforced or Involuntary Disappearances and others.

–  Libya has never ratified the 1951 Geneva Conventions on the Status of Refugeesand does not even fully recognize the UNHCR. Even people registered by UNHCR as protection seekers are arbitrarily arrested and kept in concentration camps. The UN and the International Criminal Court (ICC) have repeatedly condemned the crimes against humanity committed in these camps.

On November 2, 2022 the MoU will be automatically renewed for another 3 years, unless either the Italian or the Libyan government cancel it. The continuation of this memorandum will consolidate the inhumane conditions in Libya for people on the move.

The people of Italy, Europe and beyond must stand in solidarity with Refugees in Libya and use their power to force Italy and the EU to cancel this inhumane agreement. The members of the Italian Parliament must defend the fundamental rights guaranteed by the Constitution and contest the MoU.

ITALY MUST IMMEDIATELY STOP THE MEMORANDUM!

FREEDOM OF MOVEMENT AND RIGHT TO STAY MUST BE A UNIVERSAL RIGHT.

[Outside of Italy – in alphabetical order]

[Inside of Italy – in alphabetical order]

BRESCIA | 14:30 | Largo Formentone | March for Welcoming: No one excluded – On the side of those who are fleeing and in danger | Io Accolgo – Brescia, Mediterranea Brescia, Amnesty International Brescia, Brescia Pride and more | Event ​​​​​​​​

MESSINA | 18:00 – 19:30 | Walk through downtown streets with photos of the New Desaparecidos and signs against the renewal of the Memorandum | “Diritto di migrare, diritto di restare”