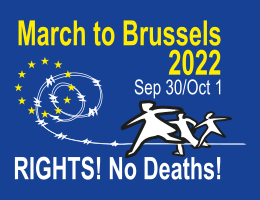 [Press release ‘Rights! No Deaths‘] 16 September 2022 – More than 130 organisations – european and country of origin of migrants – are joining together to organise a March to Brussels under the call Rights! No Deaths! They are demanding the enforcement of international human rights law at the borders and administrative regularisation of people living and working in Europe.

More than 50,000 people have lost their lives since 1993. European borders are causing death as a result of the migration policies pursued by the European Union and European governments. The absence of legal and safe channels, the externalisation of border agreements and the progressive militarisation of borders are causing casualties. The recent death of a young sub-Saharan woman shot by the Moroccan gendarmerie as she was preparing to travel by boat to the Canary Islands from the beach of Akhfennir in Tarfaya, and the at least 37 people who died crushed and suffocated just two months ago at the Melilla fence due to the violence with which they were repressed, are dramatic examples of this.