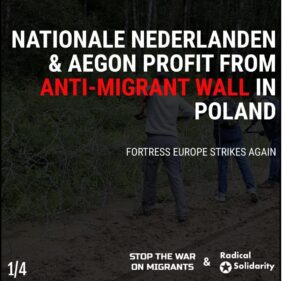 [by Radical Solidarity and Stop the War on Migrants] 1 February 2022 – Last week, Poland started the construction of a wall at its border with Belarus. This is to prevent people on the move to enter its territory (and, by corrolary, the EU) and seek asylum. After sending armed soldiers to harass migrants and refugees, Poland, blessed by EU’s ‘blindness’, is now erecting the closure of Fortress Europe. This all comes to life in the height of winter with freezing temperatures further endangering the lives of migrants. So far, official numbers say that 10 people have died at this border, but activists and NGOs assure that the real number must be much higher. For the ones who make it into Poland, they are detained in detention centres and many are repatriated to their home countries – especially to Iraq. This is yet another proof that the EU will always prefer the freedom of movement of capital to the one of people.

The wall is being built by Budimex SA and Unibep. These Polish companies will respectively receive around €71 million and €43 million, both for the construction of two parts of the wall in the coming five months, of which the total costs are estimated at €350 million. The 5.5m-high wall (including 0.5m of razor wire) will eventually cover half of the border between Poland and Belarus, around 186 kilometers (equivalent to the distance between Amsterdam and Antwerp). Over 50 percent of Budimex’s shares is owned by the Spanish multinational Ferrovial. This company was, through a former subsidiary (Broadspectrum), responsible for managing one of the notorious Australian ‘offshore’-detention centres, on Manus Island. All refugees who tried to reach Australia by boat were held here in inhumane conditions.

The complete list of companies and shareholders (mainly from Poland, Germany, Spain and The Netherlands) who profit from building this wall can be found here.

After the earlier mentioned companies will be finished with the construction, the wall will be equipped with camera’s and motion sensors. The suppliers of these technologies are not yet known, however, there is a high chance that, for this particular task, companies operating in the military and security industry will be contracted – who for years have been profiting from the militarisation of the European borders.

On top of being a humanitarian catastrophe, this wall is an ecological disaster. It is erected in a strictly protected primary forest, Białowieża Primeval Forest, endagering already fragile species and biodiversity.

The EU is still trying to pretend it does not condone the construction of border walls, scared about tarnashing its already grim image. However, this stance is completely hypocritical as the EU finances the very technology with which the walls are equipped, as well as other crucial material for border security and control. For example, in November last year, the EU supported Poland, Latvia and Lithuania with €200 million extra for border security, through the Integrated Border Management Fund. With this fund, the EU finances the strengthening of border security and control of its member states with an estimated €7.4 billion over the period 2021-2027.

Solidarity goes to the activists on the ground defending the rights of people to move as they please and seek a safe heaven, constantly harassed by the mitilary and political aparatus. Solidarity with migrants coming to Europe and everywhere in the world! For more info follow the No_Borders_Team on Telegram.

We will not accept the normalisation of such a murderous policy, the EU and all the political/economic actors involved have blood on their hands. Let’s get organised and stop this now! Solidarity is our weapon!