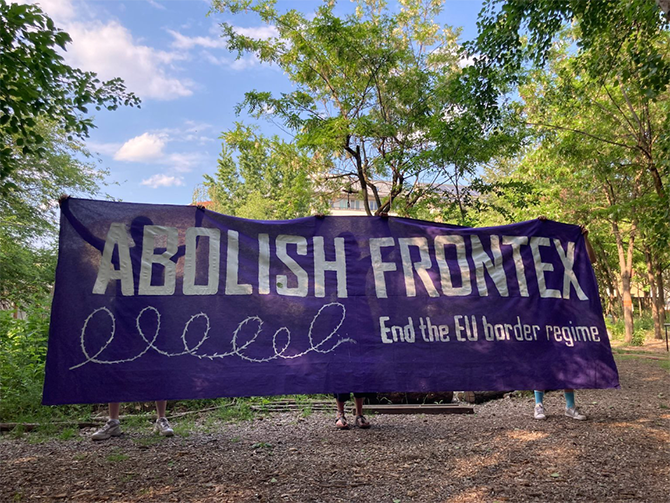 Sunday 3 October 2021 marks the anniversary of the death of over 360 people on the move, during a shipwreck off Lampedusa in 2013, and as such is a day of commemoration. Also on this day, in 2005, the EU Border and Coast Guard Agency Frontex started operating in the Polish capital Warsaw. This is not a reason for celebration or festivities: Frontex has left a track record of death and destructed lives in its sixteen years of existence.
Frontex started as a small agency, supporting and coordinating border security between EU member states. Now it is the EU agency with the largest budget, dominating EU border operations, building its own 10,000 person strong armed border police force (Standing Border Guard Corps) and increasing cooperation with non-EU-countries, including many authoritarian regimes. The first batches of its new Standing Corps have been deployed to assist with border security and control work in Italy, Greece, Spain, the Western Balkans, Lithuania and Latvia, as well as at several airports. This signals a new more active field role for the agency, next to its own main operations. Those have concentrated on stopping migrants from crossing the Mediterranean, essentially pushing people on the move to more dangerous routes and into the hands of unscrupulous smugglers. With its growing role and mandate, Frontex has increasingly become involved in pushbacks, violence and other human rights against people on the move.
Recent months have not only shown new panicky reactions on the possible migration impacts of the developments in Afghanistan, left in chaos after twenty years of being part of the permanent ‘War on Terror’ failure, and the tensions with Belarus. They have also shown that the EU as a whole ignores human rights abuses by Frontex and others during the ongoing ‘War on Migration’ at and beyond its borders. Tens of thousands of people on the move have died as a result, with countless others arrested, detained, deported or left to live in inhumane circumstances in camps or in ‘illegality’.
Rather than facing reality, ending the process of border militarisation and shifting to policies of open borders, supporting and helping people on the move and working on eliminating the reasons forcing people to flee, the EU chooses to continue its obsession to keep people out, fortifying its external borders and expanding the mandate and powers of Frontex. It envisions a future where Frontex dictates the ongoing strengthening of member states’ border security, has its own border army – equipped with firearms, patrol vessels, helicopters, drones autonomous detection systems, biometrics identification equipment and state-of-the-art surveillance technologies –  operating on the EU’s borders and in countries outside the EU and functions as a hub for joint deportations from EU countries.
Since it’s inception, the total budget for Frontex has amounted to over €3 billion. From 2015 on its budget has rapidly increased and will continue to do so, with a total of €5.6 billion under the seven-year EU budget (Multiannual Financial Framework) 2021-2027. Research by Sea-Watch and Frag den Staat has shown that even a tiny portion of this year’s Frontex operational budget would be enough to implement a nationwide civil sea rescue program. A part of these billions have been earmarked for buying or leasing border security and control equipment. During the last year, Frontex has awarded Airbus, Elbit and Israel Aerospace Industries with €50 million for drone surveillance flights in the Mediterranean. It has spent dozens of millions on prolonging other aerial surveillance services. And it is in the process of purchasing firearms for its new Standing Corps.
This new buying power is accompanied by ever closer relations with the European military and security industry. An industry which through extensive and successful lobbyists – warmly embraced as experts by EU policy makers – has managed to control the narrative underpining European border and migration policies, based on seeing migration as primarily a security problem and people on the move as threats. A narrative which has spurred the process of border militarisation, guaranteeing a growing border security market, to the benefit of the arms industry’s profits. An industry which earns twice over the bodies of people on the move, as the same companies also fuel war and repression with arms exports.
On 3 October 2013, a boat carrying hundreds of people on the move from Libya to Lampedusa caught fire and sank. Over 360 people died in one of the most severe incidents caused by Europe’s deadly policies. Since that day another 33,000 people or more died while trying to cross the Mediterranean, making it the deadliest border in the world.
Europe’s policies of border militarisation and externalisation have turned the Mediterranean and the Sahara desert into graveyards for people on the move. While desperate people are left to drown, handed over to the Libyan Coast Guard, detained and tortured, deported back to violence and poverty or forced to keep living in hopeless circumstances, the EU extends and heightens the walls of Fortress Europe. Frontex plays the central role in this cynical theatre aimed at protecting the priviliges of the rich against the rest of the world on whose lives and labor these privileges have been built. Sixteen years of Frontex has been enough. We need to abolish Frontex and end the EU border regime it spearheads.
Scroll down to content